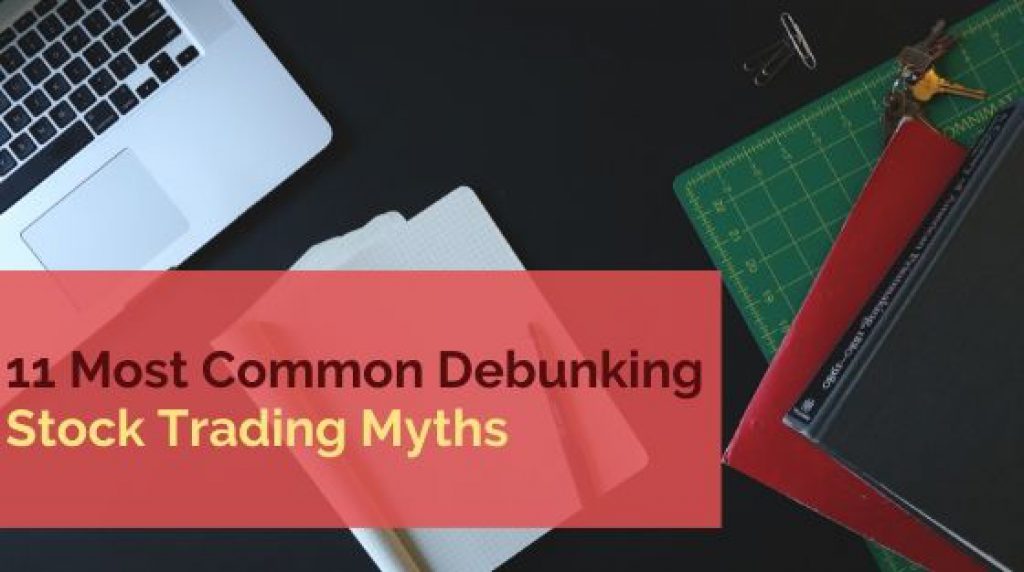 The 11 Most Common Debunking Stock Trading Myths: The favourite time pass of people is to present their opinion because it gives them psychological satisfaction. But, the problem arises when people with no or little knowledge showcase their ideas. It leads to the formation of myths.

And, novice traders, most of the time, believe in them. However, it can cause them to lose their money. Thus, it is crucial to always be wary of them as they try to avoid advice, from ‘just any guy’.

However, to help you, below is a list of top eleven myths on online stock trading. Please read them and tell us how much you believe in!

The first and the most common myth in people’s mind is that trading would make them fast money. However, the reality is to be a long term player in the stock market; you would need to go slow but steady. Also, as Buffet said, trading is not about making money; instead, it is about dodging losses.

Most users see the glitz and glamour of successful traders and enter with the wrong mindset. But, as soon as they lose their money, they get the perfect reality check. Remember, the people who are making thousands of dollars are doing it for decades.

2. You Must Pick the Highs and Lows to Make Money

Another misconception people have in their mindset is that they need to enter the market at the lowest point and exit at the highest. However, it is the worst mistake one can make. We mean if you were anytime successful in doing it, then you might have got lucky. Generally, it is rationally not possible to enter at the exact highs and lows. Instead, a successful trader is one who rides the market and not the points.

Trying to get in the market like this can cost you too much. A smart trader would use tools, indicators, and signals and focus on taking out his maximum profit only.

We have uttered this saying many times that online stock trading is not equal to gambling. Many people do not get in trading because of this myth in their heads. But here’s the thing, stock trading is a rational choice based on many factors and based on those factors, we predict that the price would go up or down.

Similarly, for long term investments, every investor does some fundamental analysis of a company, its prospects, and the current health, along with technical evaluation also. And then, he spends his money.

In place, gambling is spending your money on a random basis to earn gains, without any logical or rational factor.

4. Trading Market is for Elite People

Believe it or not, some people also think that the stock market is not for everyone. Instead, it is a place only for wealthy persons. They believe that the trading market requires a minimum investment to start your account, but that is wrong. One can start as low as he wants.

If one would start trading with a significant amount, then he will lose big money too. It is better to start small, even if you have more money. The reason is you must first know what you are doing and then should increase your investments.

The ideology in these kinds of people is they’ll buy a stock trading at a lower price and earn money as it goes back. In this mishap, they purchase the losers. But buying losing stocks without any research and analysis might cost you extra bucks.

There’s a saying in the stock market trading world that people buy and sell too early. If the stock is continuously falling, then why are you buying it? At least, let it show some positive signs first.

For instance, recently, due to COVID-19, many company shares were at their 52-week low point, which usually is an excellent investment. But, most companies broke the record and went further downwards; thus, investors losing further money.

Not using a stop loss tool is terrible because of several reasons. The stop loss is the point where you set your stocks to be sold automatically without your permission. With the help of stop losses, you don’t have to worry about falling prices nor need to look repeatedly at the prices.

It’ll also protect you from sudden falls. But, remember to place the stop loss at the right point because if you set it too adjacent to the current price, then the chart line might touch it and sell your stocks, even if the line goes up later.

Another myth is that we should not use leverage tools because it increases the risk and thus, the losses. But, the reality is it is a tool and not bad or good. Those who know how to trade with it earn two or three times the profit. While they don’t spread myths like this.

Thus, it is better to trade with a low amount or in a virtual account first. And, then if you know how to earn steady money, use leverage then.

8. Use as Many Tools as you can

It is the most illogical myth we are debunking today. How can we use all the tools in a price chart and be better at it? Just like too many ingredients in a dish, makes it fall; similarly, using too many tools and indicators shall confuse you.

One must use either 1, or maximum 2, tools only to get the idea of the market trend.

9. You can Earn by Investing less Money

No, it is not a contrary point to myth number 4; instead, it is another eye-opener. Anyone can indeed start stock trading with myths as low money as one has. But, if we are real, low volume trading is suitable for learning only and not for earning. If you want to make some noticeable profits, then you must invest first.

We mean you cannot just make $100 daily with an investment of $500 or as people say – Money attracts money!

If you think that all the successful traders are some Harvard or Cambridge grads, then you might be living in a different world. Stock trading is not rocket science with differentiation or integration; instead, it is only basic mathematics. One doesn’t even require a school certificate to be a successful trader.

What you need is reasonable control over your emotional and psychological mind, with some necessary analytical skills. These can be learned anywhere between three to six months.

11. It is better to Know Some Part than knowing Nothing

It is a common mistake young people make in every field. They think it would be better if they get partial knowledge of something rather than being unaware of it. However, it could be more dangerous. If you know nothing, you will not make any move, but if you know you are incomplete, then you will invest, thinking you know it.

In stock market trading, it is best to either have a bright, complete understanding of something otherwise don’t even think about it. It applies to everything, charts, tools, signals indicators, etc.

These myths were the most common among traders, but there are a lot others in the market. You need to be aware of them. And, remember, myths and rumours are spread by the people who themselves could not make it. It is a better way of them saying – I could not do it, you also would not be

Be aware of them!

Some ways to tackle them are – take the advice of legit, successful stock advisers only, who want to see you grow. Read authentic material, i.e. from the books, and if from the internet, make sure it is genuine.