11 Top-Notch Best Trading Movies To Get The Inspiration 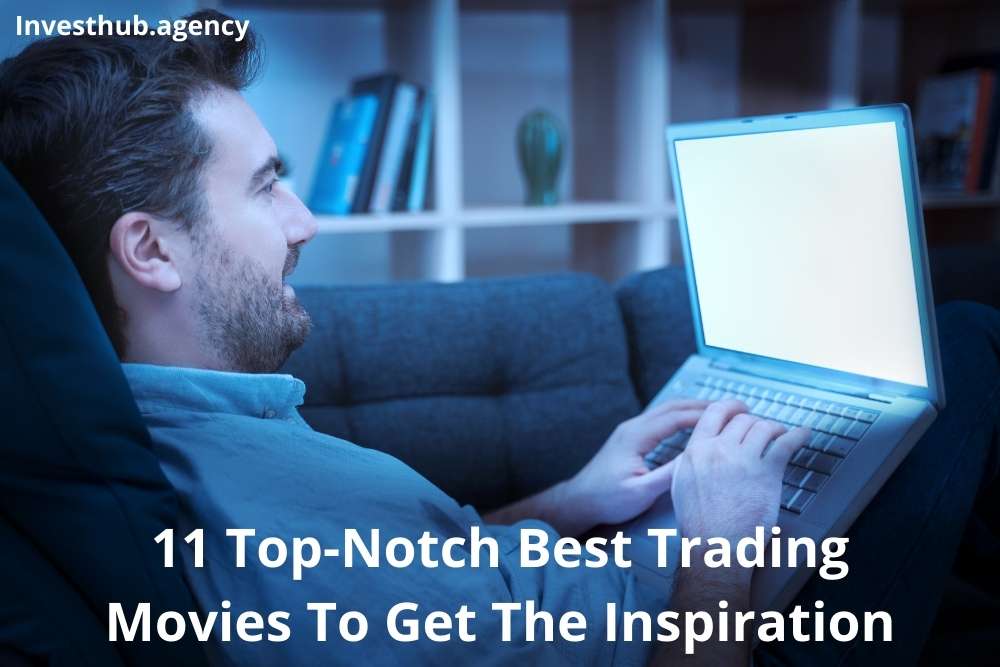 11 Top-Notch Best Trading Movies: If you think that the finance and trading field is boring, then you must read this post. The online stock trading and investing industry is full of drama, tragedy, catastrophes, and much more, which would make great cinema.

Moreover, these movies serve great learning to the people who want to know the financial industry. Also, many of the films on the list more or less would teach you a lesson. Apart from some knowledge, one would be refreshed from this always walking world too. Thus, have a look at them and start getting inspired and motivated.

Here is the list of top trading movies based on finance, trading, or investments. The list is followed by a brief final post; we’ll meet there now!

11 Must Watch Best Trading Movies For Every Trader

1. The Wolf of Wall Street

Who doesn’t know about this movie? But, not many people know that it is based upon the real-life of a share broker and financial expert, Jordan Belford. The flick is based on a book with the exact name and the character played by Leonardo DiCaprio did the work of cherry on the cake.

The movie was a blockbuster and went on for five Oscar nominations and won several awards. The film revolves around the life of Jordan from being a top trader in Wall Street to falling again. From wandering around the world in jets and luxury mansions to being a criminal, this movie might give you Goosebumps too.

Moreover, the trader was accused of selling cheap quality penny stocks to his clients and building his empire.

This film is based on the 2008’s great depression, where four people try to take advantage of the crash by predicting it back before anyone else. The film is based upon a book, The Big Short: Inside the Doomsday Machine, by Michael Lewis. Moreover, this movie is also based on a true story and used the concept of the stock trading tool, Short Selling, here.

The story revolves around four market investor who senses the tremendous real estate fall long before anyone and go short against the prices of the properties, making $1 Billion at stake.

The four investors are not related to anyone, and the film follows four different storylines with one common aim or idea. The movie was an all-time hit and won Oscar and several other big awards too.

The classic 1987 film, Wall Street, is a must-watch for all the aspiring and existing stock traders. The film bragged an academy and many other awards to its pot. Moreover, the legendary saying – ‘Greed Is Good’ by a fictional character, Gordan Gekko, played by Michael Douglas in the film went insanely famous among finance people.

The film by Oliver Stone is inspired, according to her, by her father’s life, Lou Stone, who was an online stock trading broker. Moreover, before working on the film, Oliver went to stock exchanges, got hands-on broking language and many other things, herself.

The movie revolves around two characters, one a young trader, who is willing to earn money at any cost. And, the other role is Gordan Gekko who helps the young trader in all the illegal activities. Watch it yourself to see what happens!!!

Margin Call is fictional that revolves around an investment bank during the times of 2008 depression crashes. The film gets the audience an insight into a bank that is living on leverage or borrowings and senses the massive collision of depression before many people. Now, how they dealt with the situation and were they able to survive? For answers, you must watch the film; we do not want to spoil your thrill!!!

The film exposes that there are so many loopholes in our financial system that an organization can go from being valuable to being bankrupt in few hours only. The film encounters only 24 hours, i.e. from a day before the crash to the next day.

Also, the movie won eight awards and an academy nomination.

‘Rogue Trader’ is a great movie to binge-watch as it teaches one of the most critical trading lessons, i.e. exit the market at the right time. The basis of the film is Nick Leeson. The movie depicts how a star forex broker of the country becomes the reason for bankrupting many large banks in Britain.

Nick Leeson, who was infamous for his extraordinary ambitions, becomes a massive star in the exchanges. However, his dreams made him do things which are not ethically right for investment and became the reason for bankruptcy of the world’s one of the oldest merchant banks, Baring Bank. He does not settle for cutting shortfalls and loses everything (of everyone) in the hope of a return.

This film is a fantastic insight into the brain of a trader and why there’s a reform needed in the financial trading industry (still).

If you want to know the real scenarios of how stockbrokers work and how they sell you stocks on which you should never invest. While many top trading movies present the glamorous world of the traders, this movie would show you the lowest points of the firms.

The movie revolves around a teenage who drops college and wants to make very big in his life. He doesn’t settle for anything and wants something extra. He lands up a job at a brokerage firm, thinking it is the turning point. However, he soon discovers that everything doesn’t work in a legitimate way in this world.

For you, the film would leave a lesson that picking stocks without proper research and analysis could be devastating. And, do not ever fall corrupt.

Now, take the time out of inspiration and watch this comedy top trading movie. Although the movie revolves around characters more than the trading, however, the last 20 minutes presents the actual scenes of trading sessions.

Moreover, the story depicts the life of two persons, one a managing director of a commodity trading organization, and the other, a hustling street artist who cons people for a living. Both of them switch their characters and roles and how they handle all the obstacles is worth watching.

However, you won’t be let down by life learning from this comedy-drama.

If you want to get the scenes of floor trading, i.e. offline desk trading, then believe us it is the best choice. One would be taken to Chicago’s trading exchange floors. Moreover, you will get to know that times the floor trader’s lives, their habits, and risks associated.

For educational purpose, it is a fantastic watch. First, you will encounter some of the best issues between gambling and trading, which really existed. And second, if you are a novice, then you will be introduced to the future and options trading.

Although the floor trading has now become very rare because of the online stock trading platforms, it still exists in some places. This 2009s documentary, by James Allen Smith, is a classic with high tension situations.

Inside Job is said to be the best documentary ever made on Wall Street and the 2008 crisis. The movie which won several awards, including Oscar, is narrated astoundingly by Matt Damon. If you are someone who wants to know the details of the 2008 recession, then pick this one! You will not be disappointed.

It is shocking, revealing financial institution movie which won three golden globe award nominations. Further, it is not a fiction but a biography on the life of Henry Paulson which takes us to behind the scenes situations happening in his and his colleagues’ lives.

The crisis drama is a realization that the US financial system is at the critical end, and the changes are needed, either by bodies or by government. The interesting thing is nothing much has changed yet!

One would know the mechanics which the government implements to save the “TOO BIG TO FAIL” institutions from falling, and that’s how the name came. The movie, inspired by the book from the same name, revolves around the fall of Lehman Brothers, the bailout of Bear Sterns, and the borrowed securities which took the trading crash to the economic level.

11. Barbarians at the Gate

Barbarians at the Gate is a true story on the life of F. Ross Johnson, CEO of the tobacco firm RJR Nabisco. The character played by James Garner, and the movie won two golden globes, six other awards, and a plethora of nominations. The story depicts how Johnson wants to leverage buy-out the whole tobacco company, which is undervalued, and become superrich while putting in danger all the employees.

But the professionals who work for him eventually become his competitors and starts bidding. What happens after that? For that, you need to watch the film!

So, this was our list of top 11 trading movies. Binge-watch anyone of them and get motivated to do right, ethical, and legal actions to earn money. Otherwise, the reason would be in front of you!

Who said movies are a waste of time? Because if you pick the best ones, then you can gain significantly better. Remember, these listed top trading movies are not just for entertainment; you would get a valuable lesson from each of them. For instance, ‘Rogue Trader’ teaches you the value of cutting your losses early; otherwise, the consequences can be worst.

Watch any one of them and tell us what you learned from them, as homework.

Obviously, the movies are not the only sources. Instead, we think books can be a good source of information too. Thus, here’s a fantastic article on the best stock trading books for you!

With so much excitement, volatility, and uncertainty in the market, we should not wonder why the directors are showing their interest in the finance movies.

At last, brag the popcorns with Coke and start watching!