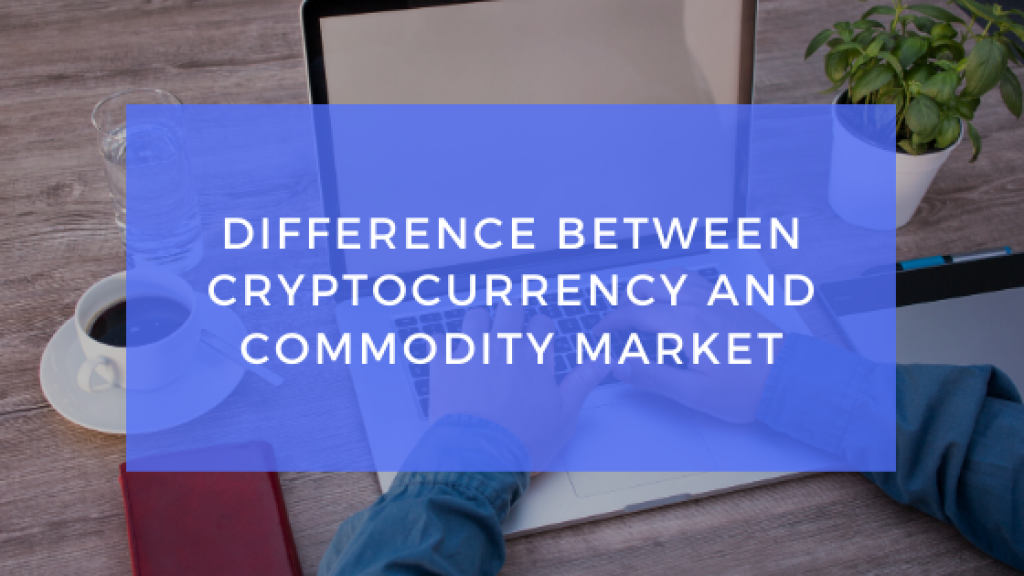 Cryptocurrency and commodity market are two terms when they strike in mind one thing that pops up is lots of money. And it is natural because of the association with a quick movement, and fast result. Their assets are equally highly-priced and volatile. But several differences remain for an investor to see. The impact both hold in the financial markets is impeccable, and the global economy looks at both with wanting eyes. Let us know and discuss the cryptocurrency and commodity importance, charisma despite differences in methods of business.

The date of origination

From their origins, one can differentiate them and know what makes them so distinct from each other. The gaps in generations showcase the points of deceptions and bring out the reality. Also, it exhibits the difference of opinion can have on people.

As per learned historians, the trade of the commodity market dates back to 4500-4000 Before Christ (BC). The origination happened in Sumer (Mesopotamia), which is now in the Southern region of Iraq. But talking about cryptocurrency and in comparison to the commodity trade, it stands no chance in history. The technology was born in 2008, which is more than a decade back.

Hence, it will be right to say that the crypto market is evolving. Also, it has a lot to give to marketers and investors. On the other hand, the commodity market has a mammoth experience that is unbelievable in command and rank.

So, cryptocurrency has a lot to travel before one can make a cumulative analysis of its historical significance.

Aspects of physicality and hoarding

Cryptocurrency has its existence through virtuality. No one can touch it, and there is no physical substance that one can keep near and sell afterwards. Whatever goes on the internet is the value a trader holds in a cryptocurrency. But in the commodity market, anything that is essential to living is available to people in physical form as well. They include oil, gas, gold, silver, wheat, barley, livestock, maize, copper, zinc, platinum, sugar, cocoa, products made of milk, fruits and more.

If the indexes are spiralling downwards, then, in that case, one can hoard them and sell later on. Hence, it is a pleasant way of dealing the inflation and tough time. However, such pleasantries are not there in the digital medium like cryptocurrency. And there is no other option but for the market to do some wonders during adversity. In this way, when money gets stuck, a trader will have to rely on the market to bounce back.

There are no properties, products or assets to look forward and lock. And this drawback sends chills to many people across the globe. Following the reason, the market of cryptocurrency saw a downfall in the year 2017, 2018 and 2019. It all happened after the balloon of inflation in the digital currency. And people began to question it.

Takers in the physical world

Psychologically, people get attracted to a thing more to which they can touch or feel. A visual appeal coupled with a gentle touch has more value than anything that one cannot reckon through senses. And this is a deep as a crater difference between the commodity and crypto market. There is nothing like that a trader can’t sense through the bodily senses. But on the other side, it is impossible to achieve the feat. Because cryptocurrencies are a product of sharp computer coding, which is not for everyone to see.

Both cryptocurrency and commodities are undeniably on different paths. However, the network of computers is present in both but in a discontiguous way. The existence of cryptocurrency depends on digital mining and coding. There are blockchains through which its value appreciate or depreciate. Of course, the valuation is a game of volumes of the number of buyers and sellers. But that comes afterwards.

Firstly, the creation of digital currency is the main focus and talking point. Due to the free source that cryptocurrencies, anybody can take a chance and make their currency. Although, that is a different matter that it may work or not. It is not in the hands of the creators. They can make efforts in promoting them. Just like someone did with Bitcoin, and it is one of the most common digital currencies in the present scenario.

Investors show interest in it, and many have become millionaires over time. When bitcoin rallies, there is no other arrangement in the financial market that can beat it. This and all when there is no property attached to it. A network of computers makes it work. They are present in many countries and in different capacity.

Though, commodity market also works primarily on computer networks. But there are regulatory bodies that look after the technicalities and make sure everything goes smoothly. With the advent of the online bazaar, most of the significant transactions take place on platforms of websites.

The storage of data also happens on clouds that are a set of computers only in the web space. It is an undeniably reliable source that keeps all brokers, investors and buyers at a single position. But the assets that get traded are present in physical forms as discussed earlier, while crypto lacks that.

Everyone wants unbiased work that allows people to trust the system. Cryptocurrency excels in it because of the technology. For every activity, logs get created on it, which is for everyone to see. Also, as there is no owner, no one can hack them. Several hackers tried in the past to fail.

The blockchain is gaining momentum after the successful testimonial. Now, the conglomerate is trying to impersonate it due to the resourcefulness and assurance.

However, in cryptocurrencies, there are no owners. They are open for all, and no one can display supremacy on the technology. From a rich, weak to a middle man, everyone gets treated equally, and indifference gets meted out to all. Whereas, a centralised body in respective countries look after the regulation and monitoring.

Although chances of cheating and hacking remain there. There is news now and then that people getting siphoned off despite precautionary measures in the commodity market. The cases are shifting the focus of regular buyers to other platforms that include cryptocurrencies.

The best asset to trade in cryptocurrency and commodity.

In several circumstances, it is tough to figure out for adjudging the best out of a lot of many greats. But the scenario in both these markets is slightly different and better than others. There is one clear champion in each camp. Bitcoin and gold are two valuable assets that have elements of excellence and pride of performance attached to them. The glory of the past speaks volumes. Lets us know briefly:-

The digital currency is one of the newest currency in the world stage. It came into existence on 3rd January 2009. Following the concept of cryptocurrency, it does not have any authority ruling it. There is no central bank or an administrator that makes rules for it. Bitcoins top the chart of crypto trading because it was the first of a kind and it got the deserving success.

However, there is a bar on its extraction and mining, aka supply limit. It is 21,000,000. So, lesser the number of people hold it; more are the chances it scales height in terms of its valuation. In the past, there are references to bitcoin running errands. It created a plethora of millionaires in a short period, which is there for the world to analyse.

Similarly, in greed, many people lost their capital. Bitcoins have a universal appeal and acceptance that is why in many nations, citizens are using it as a secondary currency. It sounds surprising, but the immense popularity has led to the proportions. And due to this, other cryptocurrencies are also finding their acceptance among people.

The metal is a precious entity, and international trade happens, keeping in mind its value. Also, in some countries, buying it is auspicious. Hence, people purchase it. There are jewellery and wearable items that get sold the world over. And the demand is high always. The consumption of gold speaks about its importance. Every year tonnes of products made of the metal go into purchasing. That is why commodity traders never miss a chance of betting their prospects on it.

Hence, investors of commodity market look forward to investing in gold. Even during inflation, it does well than its contemporaries. On a longer run, the returns here outperform many other financial capital markets. That is the beauty of the metal is it never disappoints when people rely their faith on it.

Gold holds the nature currency because its conversion is easy into money. It is one amongst consumer goods, while there is no currency in the crypto domain that holds the title.

How to open an account in Cryptocurrency and commodity markets?

Open a cryptocurrency account with the help of following steps:-

Registration on a commodity platform

Which are the best platforms for commodity and crypto bazaars?

Before knowing about the best platforms, one should know about the vital difference. One can sell the commodity items in an open market, through a shop or showroom, but there is no such option for cryptocurrency. The digital form of the currency depends on the internet, electricity, systems (mobile, computer and laptop).

But to buy natural gas, crude oil or edible items, one does not need to rely on the technologies mentioned above. These are available in shops and places. It is one of the remarkable distinctions.

Etoro- One can find a plethora of digital currencies to choose from on the platform. It is one of the biggest cryptocurrency brokers and holds high regards in the minds of traders. It functions for twenty-four hours a day.

Easy Markets-  It precisely trades in three main currencies that are Ripple, Bitcoin and Ethereum. There are no charges from the platform on them.

Avatrade- The platform supports as much as fourteen languages and charges no hidden fees.

FXTM– It can trade in Litecoin, Ethereum, Ripple and Bitcoin. Like all other platforms, it also has the facility of trading twenty fours hours.

OctaFX- One can trade for the entire day on this platform harbouring Bitcoin, Ethereum and Litecoin for trading.

Investous – One can receive daily updates and news about the market happenings and routines. For gaining more knowledge, there are webinars.

ETFinance- Regulation of CYSEC takes place here. There is no commission charged, and there is a negative balance protection condition.

Plus 500- There is a service of demo-account and has zero commission charges. The minimum deposit here is Euro 100.

Finding the distinction between cryptocurrency and commodity is a complex matter. They are traditionally different from each other and have fundamentals that do not match. If a trader wants to deal in both, then lessons for each are remote from each other. The only similarity both share is they are parts of the wide financial market. The domains may require expert advice, especially the commodity market. One of the best brokers is Investby.