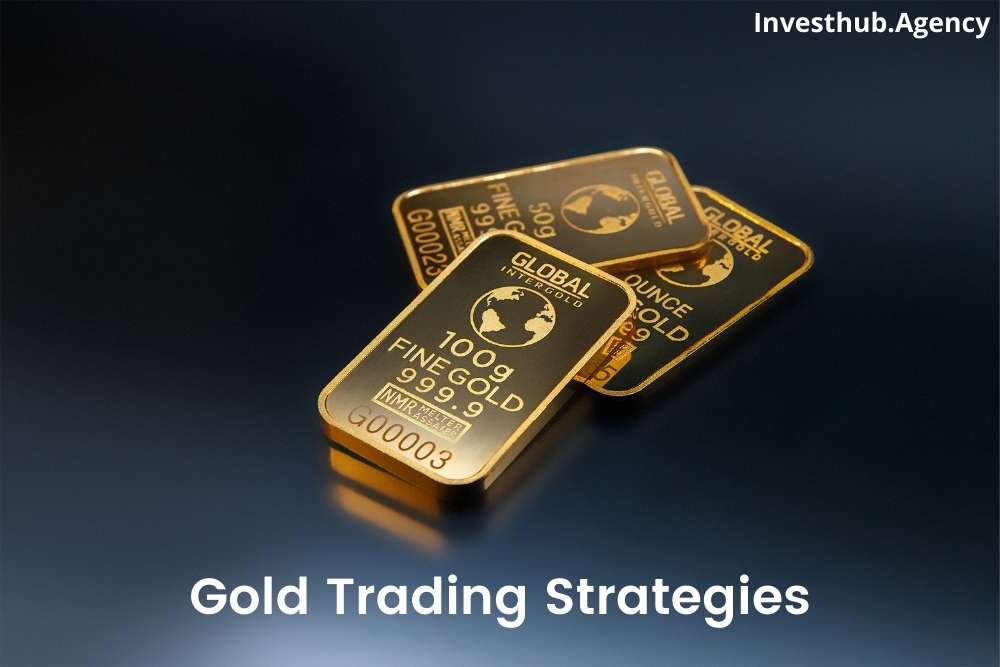 Market participants often struggle to take a head start with gold price fluctuations since they haven’t absorbed the distinctive characteristics of world gold markets or the hidden perils that can rob profits. Moreover, not all investment vehicles are created the same way: Some gold instruments are better at producing consistent core results than others.

Trading the yellow metal isn’t all that difficult, but the activity demands skill sets unique to this metal. There are various gold trading strategies. Novices should be careful, but seasoned investors will benefit by incorporating strategic steps into their daily trading routines. Gold trading strategies will one day be second nature to you.

The Price of Gold: a History

To obtain a historical perspective on gold prices, between January 1934, the year of the Gold Reserve Act, and August 1971, when President Richard Nixon closed the U.S. gold purchase window, the price of gold was effectively set at $35 per ounce.

Before the Gold Reserve Act, President Roosevelt had had citizens  surrender gold bullion, coins, and notes in exchange for U.S. dollars, and  made investing in gold extremely difficult,  for those who did manage to hoard or conceal quantities of the precious metal.

How to trade Gold?

Gold is a difficult financial asset to value. Gold is   durable, portable, uniform across the world, and widely accepted; however, unlike the more commonly traded currencies, gold is not reinforced by an underlying economy of workers, companies, and infrastructure.

In other ways, gold can be likened to a commodity like oil or corn since it is a raw material , bearing standardized physical characteristics. Unlike other commodities, though, the price of gold often fluctuates independently of its industrial supply and demand.

Because of this tendency, the emotions and behaviors of traders  drive major trends in the yellow metal. With gold , traders seem to be polarized between diehard “goldbugs” who hold that gold ought to  be worth $10,000 an ounce since central banks globally are debasing their currencies, and bearish traders stressing that gold is a “barbarous relic” that should be worth closer to $100. The gold bugs’ view developed into hysteria back in the mid- and late-2000s.

A contentious point for gold traders is on the true correlation between gold and the U.S. Dollar. Since gold is priced in U.S. Dollars, it would be logical to assume that the two assets are inversely correlated.  The value of gold and the dollar move opposite to one another.

Sadly, this  view of the correlation does not hold in all cases. Suppose you are shown the rolling 100-day correlation coefficient between gold and the U.S. Dollar. The correlation coefficient measures how closely together gold and U.S. dollar have moved over the last 100 days. A reading of 1.0 would show that they moved in perfect lockstep with one another. Conversely, a reading of -1.0 would show that their movements have been diametrically opposed.

The correlation is negative most of the time, demonstrating the U.S. Dollar does tend to move opposite to gold. However, it also shows a tendency to spike rapidly in periods of financial stress, such as  the Great Financial Crisis in early 2009 and the end of the first iteration of Quantitative Easing in mid-2010.  Traders will buy both gold and the U.S. dollar as “safe-haven” assets during uncertainty.

Traders who unquestioningly traded on the assumption that gold and the dollar are inversely correlated would have encountered some tough market conditions , possibly losing trades over preceding few years.

There is no single “best” way to trade gold. Many traders from other markets have found that the technical trading strategies they employ on other instruments can seamlessly adapt to the gold market, since gold gives durable trends. For instance, many traders have succeeded adapting strategies based on trend lines, Fibonacci analysis and overbought/oversold oscillators like RSI and Stochastics 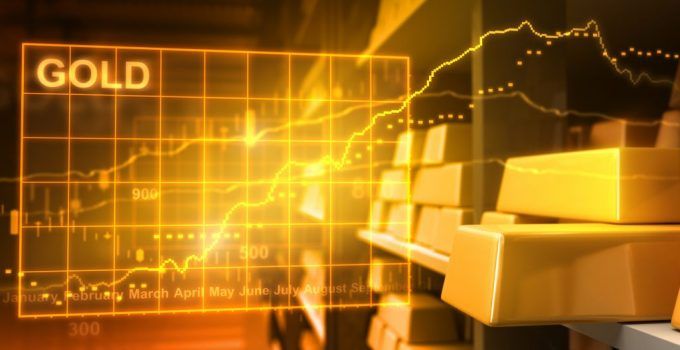 A 10/60 moving average crossover on the 1hr chart can be a strong combination for shorter-term traders. Historically, these settings have allowed traders to successfully trade the middle portion of a trend, though there is no guarantee of future performance. Suppose a chart shows how this strategy could be applied in the gold market:

At point #1, the shorter-term 10-hour moving average crosses below the longer-term 60-period average, implying that traders ought to enter a sell trade since a bearish trend may be forming. The moving averages do not cross again until point #2 a few days later, once gold has trended down to the upper $1200s.

At point #2, the initial sell trade is closed for a credible gain and a new buy trade is activated as the trend shifts back to the topside.  Post a brief consolidation, gold rallies back into the lower $1300s, and the trade is closed on the bearish moving average cross at point #3.

However, this strategy will produce losing trades . In this case, the big spike near point #4 results in  the sell trade from #3 to be stopped out for a loss. Moreover, the trade must be closed at the market price (near $1330) when the cross occurred, not the $1315 level where the two moving averages actually crossed.

This simple gold trading strategy can assist traders catch the middle portion of trends in more volatile trading environments , but using it when gold is merely consolidating in a range can lead to a series of consecutive losing trades. Consequently, traders may want to consider complementing this gold trading strategy with other indicators to improve its long-term profitability.

Longer-term position traders and investors can concentrate more on the essentials driving gold’s price, such as the level of real interest rates.

Suppose a chart shows the relationship between gold prices and the yield on TIPS (a proxy for real interest rates in the United States). The inverse correlation is apparent, but it looks like gold’s rally accelerated since real yields plunged below 1% in early 2009. Expectedly, a longer-term look at the relationship would show that gold prices as a rule fell in the late 1990s( characterized by real yields above the 1% threshold).

The ability to use a filter based on real interest rates is one of the specialised features that traders can use to gain an edge when trading gold, but the trading strategies and opportunities in trading gold are truly limitless. As forex traders seek out stable investments that can hedge against inflation, market instability, and other geopolitical factors affecting currency prices, gold has become evermore popular over the past few years. Traders can use gold as a way to hedge against other investments, or as a safe haven that gives consistency over time , being more resistant to dramatic valuation swings than most currencies.

XAU/USD is one of a number of gold pairings forex brokers now offer, making it easier than ever to incorporate gold as part of your forex trading strategy. The stability of gold prices over time also makes it an important asset during inflationary periods such as the one we’re seeing today.

As the COVID-19 pandemic shocks the global economy, foreign governments and practical forex traders are shifting more of their money into gold as a safeguard against losses due to inflation. Economic practices such as printing more money can demoralise global currencies, depreciating their value in relation to stable assets .

Gold’s stability is owed largely to its relatively fixed global volume, which can’t be suddenly increased in the same way that governments can print more paper currency. If you’re anxious to make better use of gold , here are  trading tips to light the way for you.

Day-Trade with the New York Close

Since XAU/USD tends to trade in a range, an easy gold trading strategy would be to identify buy or sell opportunities within previous highs and lows for the trading pair. Traders can open a position on gold when it’s trending up, for instance, targeting a previous high as their sell price, or vice versa.

Because gold is a relatively stable asset, it’d possibly be able to reach these previous highs or lows over time. Nevertheless, this isn’t a good strategy for day trading, since it can take time for these targets to be hit. Besides, range-bound strategies as a rule don’t provide quick profit opportunities like momentum strategies do. Nonetheless, it’s a comparatively low-risk strategy made to generate some profit off reliable XAU/USD price movements.

When political or economic uncertainty causes concerns about currency prices, gold can be a stable safe haven , shielding your liquid assets.

Gold is strongly correlated to the U.S. dollar, besides other stable currencies such as Japan’s yen. Definitely, opening a position with XAU/USD can be a reliable means of protecting your assets from unforeseen  contingencies affecting other forex markets.

Take the aid of the Symmetrical Triangle for Analysis

The symmetrical triangle is a simple chart pattern showing a period of consolidation that may lead to a price breakout. Symmetrical triangles feature the convergence of two trend lines progressing at a similar slope, but in opposite directions. As consolidation takes place, price movement on the pairing grows tighter, making for a potential trading opportunity on a breakout.

A stop loss order can be placed just below the descending trend line once the two trend lines converge. Subsequently, sell orders can be issued in the event that the price of XAU/USD successfully breaks out. Increased market demand for gold can impact prices due to the fixed global supply of the metal. Demand tends to arrive in multiple forms. Certain industries may increase their acquisitions of gold owing to the material’s role in consumer production. Both the medical and tech industries, for instance, use gold in specific products and solutions.

Consumer demand for gold jewellery may also affect prices. Take into consideration global demand in foreign markets where gold jewellery is thought of as both a luxury good and an investment asset.

Central banks buy gold as a hedge when they’re anticipating volatility in particular currencies. Not long ago, for instance, China and Russia made headlines for making significant investments in gold, which was a reflection of their concern about the future price of the U.S. dollar and the euro.

Historically, gold prices tend to appreciate when the real interest rate plummets below 1%. By pursuing this interest rate as it changes over time, you can identify a strong buying opportunity.

In the past number of years, gold mining hasn’t seen any remarkable shifts. It’s not necessarily connected to a static demand for gold. Although gold is in demand and has seen general mining production increase over the past decade, today’s gold mining efforts face higher costs.

The most accessible gold reserves have already been mined and worked into the global supply. Remainder  gold reserves stand for much more expensive mining operations, leading to contraction in  profit potential for mining businesses.

But limited production does not mean that gold is ready to keel over. Au contraire : stable gold production could pressurise global demand and lead to higher prices, especially if central banks and other common buyers of gold start seeking out this asset.

Although the price of gold is impacted by different factors than that of typical forex currencies, many of the rules for evaluating forex currencies still hold good. Forex traders should consider XAU/USD as a reliable safe haven for their investment activity, besides being a potential profit source. That would materialise only if they can usefully analyse gold’s price movements and develop trading strategies to capitalize on this opportunity.

If you wish to start your gold trading journey you can start with PrimeFin. It is one of the best trading platforms that offer the best trading tools and conditions with low commissions and charges. Explore detailed PrimeFin review.