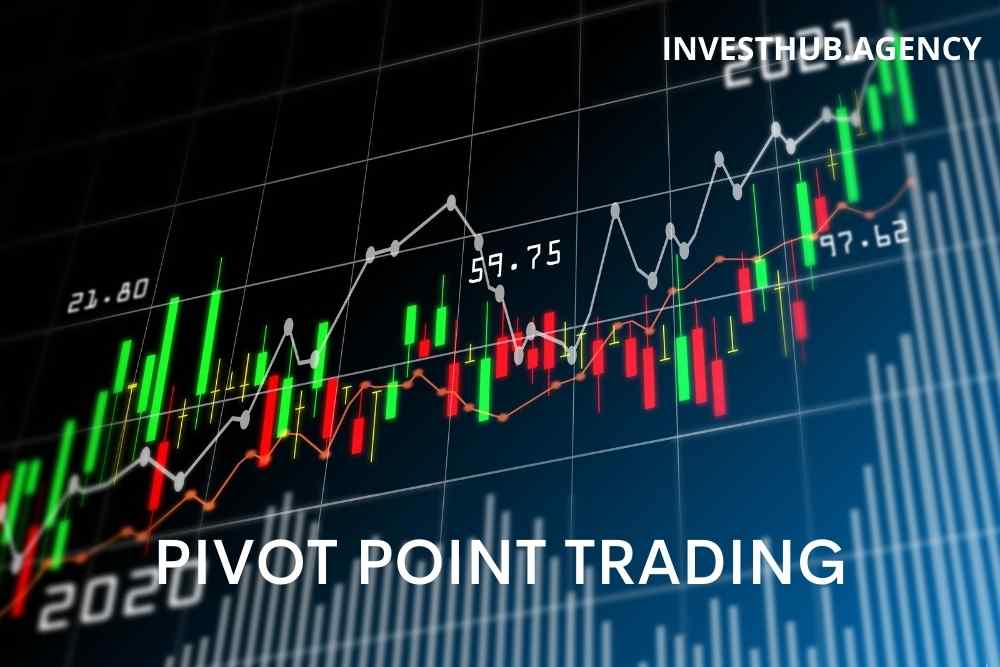 Pivot points are great at identifying support and resistance areas. It makes great good sense to have a comprehensive trading plan with a good number of indicators. Then, you do best by applying pivot point trading in conjunction with other indicators. This strategy will only be as good as this when you’re working on the holistic approach. However, t cannot be stressed enough that pivot points are worth the effort of studying and following.

What are pivot points?

Pivot points interpret market movement direction in the context of a wider trend. Since these are instrumental when traders try to identify where prices may find support after plummeting, or encounter resistance post ascent. That is why pivot points are understood to be yet another kind of support and resistance.

How do we calculate pivot points?

The five point system is generally used. This utilizes the preceding high, low, and close. This uses two additional support levels and a couple of extra resistance levels, giving us five pivot points. The calculation goes as follows:

There are other ways of arriving at these formulae. However, these remain the accepted standard. Just by opting for ‘pivot points’ in the drop down chart in a broker platform chart these points are added. Conversely, these points can be right clicked for selection. Rather than using pivot points each and every day, a trader may employ weekly data. The latter have greater relevance to long term trading.

Pivot points may point out the general trend. That’s  because a move through pivot points to the

upside would only denote an uptrend. When the opposite is obtained, a downtrend is indicated. Here, a price keeps on plunging below pivot points during a session. Akin to basic support and resistance, this less-than-surefire system tries to assess preceding important levels to arrive at data worth watching. Therefore, while some trading days there might be market concordance between price and pivot points, at other times there may be no accord there at all.

Pivot points are good to go with any kind of chart. However, the technique goes best with candlestick charts. Resultantly, we have a better understanding of price action.

A trader can gauge entries more effectively, thanks to the use of the S1 and S2 , and E1 and E2 pivot points. Rather than examine rallies or falling markets, a dip to the S1 support level followed by a rally to R1 points out a more surefire way of trading. There’s no purchase trying to buy as the price hits R1. In an uptrend the trader will wait for S1/S2 pullbacks. In the event of downtrends they will be with retracements selling at R1/R2.  It is best to add to winning trades, while cutting losing ones. We cannot gainsay that pivot points make foe a more systematic approach to trading.

How did the pivot point calculation come into being?

Life went on in the olden days even in the absence of computers. Market makers and floor traders had to decide upon the relative expensiveness or affordability of a price.  At some stage, traders began to take the high, low, and closing price from the preceding period , dividing them by three to arrive at the pivot. From then on, there were only little ways to support and resistance levels.

Oftentimes traders employ validation tools such as indicators, oscillators, fundamentals, candlestick patterns and price action together with the relevant pivot to make the best trading decision.

Pivot point trading is contingent upon a number of guidelines: price above pivot=Bullish bias Price under pivot= Bearish bias. Due to enhanced data set, longer period pivot points are even more reliable. Pivot extension support and resistance levels can be used as supplementary price levels.

Pivot point swing trading is possible thanks to weekly/monthly time frames. This appeals particularly to traders who go for medium to longer-term trades. The pivot price can act as a support level. Notwithstanding false breakouts, there is considerable usable upside. In the event of a longer time horizon, the swing traders can only rejoice.

Sometimes the possibility for heightened moves are much more likely in times of tumultuous volatility. Traders are most likely to examine the possibility of finding the breaks of each support and resistance level. This could, they believe, facilitate their entry in a fast-moving market trade. . Especially with regard to weekly/monthly pivot points,this is relevant to longer term pivot levels. The pivot indicator has to come with an extended data set. Traders can enter a long trade post breakout.

Pivot points’ basic features can make them compatible trading strategies. The indicator is employed in different markets’ day trading. These markets are commodities, futures, forex , satocks, and indices. The indicator can also guide as to the bearish or bullish  or bearish characteristics.

When the price falls through one of the indicator levels. The next lev.l can be utilized as a profit target. Conversely, it may just give its perspective regarding where the price may head next.

The price could move across different trade areas.  The indicator levels may behave as if they were possible trade areas.

When the price is above the pivot point, there’s every likelihood of there being an uptrend. Irrespective of whichever level the price is in the vicinity of, traders should wait for the price before seeking assurance regarding market movement direction.

Patterns are a source of trade breakouts.  The breakout decides the result, since the levels may lead to the price to reverse or keep going with the latest trend.

Sometimes downside breakouts are employed in the entering of a short trade. A stop loss then has to be placed nearly 0.1% above the rectangle top.

In the event of an S3 target, it is possible to employ a trailing stop loss. If a simple moving average, or SMA gets added to the chart, in the event of the price crossing back above the SMA, traders ought to quit the trade.

As far as candlestick patterns are concerned, engulfing patterns seldom fail to be useful. An engulfing pattern can be imagined as a large candle, with yet another behind it opposite to it in terms of direction and colour. The second candle, actually, does the engulfing. Hence the moniker, ‘engulfing candle’.

Reducing the frequency of losing trades is doable, the facilitation involves taking trades in a general downward trend direction.

Suppose there’s a chart signaling a winning trade. There are two hypothetical bearish engulfing patterns with stop losses near the top. Since these are not hit, the price continues to lower.

With their one, three, five or even fifteen minute or hourly charts, it comes as little surprise that day traders are the most frequent and dedicated pivot points users. Irrespective of the timeframe used, pivot levels remain the same, being as they are based upon a mathematical formula for the previous day’s high, low, and close.

Envisage a ten minute chart. We see more action, in greater detail. At the first cursory glance, barely the current and preceding sessions might be visible. But upon looking closer, we can even make out smaller details within these two days.

The forex market is open 24 hours every business day. Forex pivot points are calculated on the basis of the high and low for the whole 24 hour period. It is true that pivot point indicators may be the source of important areas to watch during the upcoming trading day. There are only a handful of levels that would be particularly useful for the trader’s analysis, however. There is some solace in the thought that you can face trading a few hours, armed with price action data ranging over a whole 24 hour period.

Pivot points may also be used on the basis of hourly or 4-hourly high, low, and closing prices. On a good broker platform, you may add pivot points to your chart. You also change the timeframe of the indicator. It is very likely that, during a 24-hour period, no less than 6 sets of pivot points will be generated. This may open up more trades, and better insight, for traders.

FTSE 100 stands for the biggest companies by market capitalization in through UK. The pivot point trading indicator can be applied to indices, too.

With the help of index futures contracts, you may well mull trading indices any hour of day or night. To generate more trade levels in the course of the day, traders have the use of high, low, and close prices for smaller time frames.

For you to start trading with pivot points, you need to re-think entering trades, taking profits, and setting stop loss orders. It is easy adjusting pivot point settings. These include the pivot interval. You may also find out the historical pivot points. On such occasions, a trader has good cause to make use of drawing tools. These could include rectangles, trendlines, arrows, triangles, and text notes to make your data complete and approachable.

The pivot point indicator being applied to a price chart, traders may start looking for opportunities. These levels will take up the role of support and resistance. Chart pattern breakouts and engulfing patterns are set to occur in the vicinity of these levels. These may be called entry signals. You can place a stop loss just outside the opposite of the pattern. Conversely, in the case of the target, it might be prudent using the next pivot level or a trading stop loss (for instance, a moving average).

How to trade pivot points?

Pivot points are based on high, low, and close prices of a given timeframe, generally in a 24-hour period. To come up with a pivot point trading system, a trader has to supply the indicator, a trading instrument/market of their choice, and a trading strategy. Included too are an entry method, stop loss and  a profit target.

A distinct disadvantage of pivot points is that a comprehensive knowledge of pivot trading throughout the day does the day trader little good. He’s only concerned with his handful of hours. Timeframes are often arbitrary, and are not much of a success in proving their usefulness to day traders.

Before trading off a pinot point, it is better to wait for a price action signal. As we already are aware, chart patterns breakouts and engulfing patterns give information regarding price movement direction.

Use pivot points as part of your forex trading strategies exactly as you would your support and resistance levels. Much the same way as the latter, the price will test the levels again and again. The level’s strength is directly proportionate to the number of times a currency pair touches a pivot level then goes back. As a matter of fact, pivoting is only reaching a support/resistance level, followed by reversing. A trader is assured good trading chances when he finds a pivot level holding.

Used in commodity and equity exchanges, pivot points have ready uses in Forex trading as well. Calculated on the basis of high, low, and closing prices of foregoing trading sessions, they are useful in predicting support and resistance levels in the current and upcoming sessions. Entry and exit points are thus easily determined, and subsequent stop loss and profit taking becomes easier to administer. Without doubt, pivot point trading hence becomes a vital part of your forex trading.