Virtual bitcoins as a money substitute with pitfalls in 2021 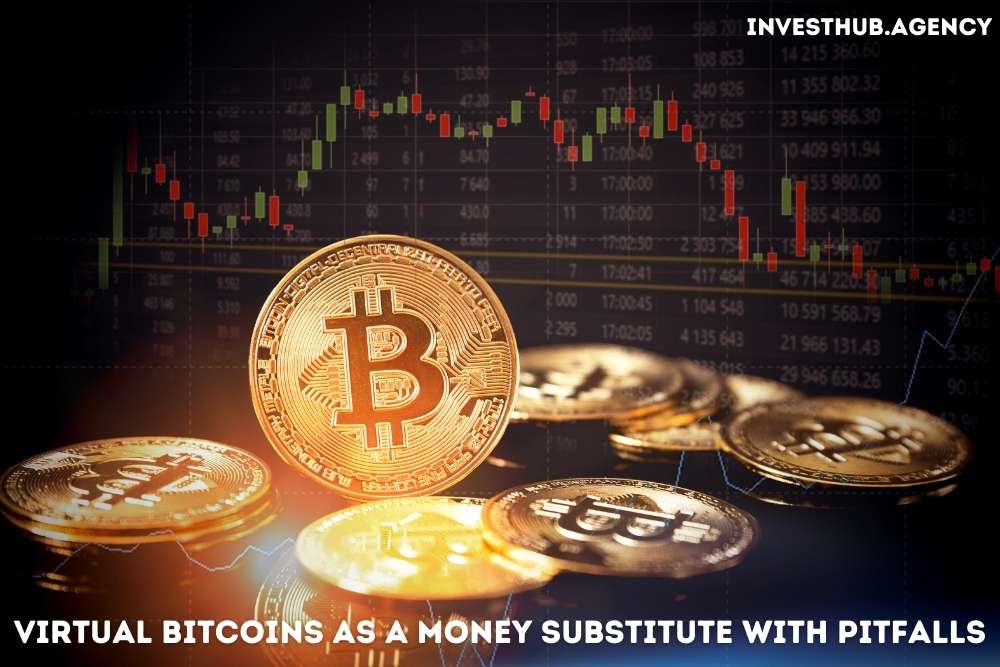 Is virtual bitcoins as money substitute with pitfalls? This is the biggest question that arises in everyone’s mind, and every person is talking about it because digital currencies are becoming popular rapidly. Everyone is curious what if digital currencies will take the place of paper currency? It is tough to determine the answer to this question. This thing consists of both Advantages and Disadvantages. So, here we are going to discuss whether a digital currency (Bitcoin) as a money substitute is dangerous or profitable.

All these blocks are linked together to form a blockchain. A blockchain is a publicly available record of bitcoin historical transactions.

These “blocks” are developed once every ten minutes through the transaction done by any network user. The user will get a reward as a newly issued Bitcoin. The “proof of work” helps to determine which user-developed this block and get the reward. Do you know what proof of work is? It is the utilisation of computing power used for determining a huge random number. A new bitcoin is issued to the users who find it nearer to this number. This process is called “mining” bitcoin.

Rewards are becoming zero as per timing due to the absolute limit of 21 million on the number of virtual bitcoin present.

According to some financial experts, those days are not too far when people use bitcoin to buy things. According to them, bitcoins are not the future, and they are the present. As we all know, cryptocurrencies have already made their identity in the financial market, But what about other places. Can you purchase a car in exchange for Bitcoin? No, you can’t; even Tesla also stops selling cars in exchange for bitcoin.

Next, can you purchase a property using bitcoin? Not yet, Bitcoin is not treated as a centralised currency. Not even you can buy pizza using bitcoin. You may still require fiat currency for purchasing all these things. So how can we say that bitcoin is present? And We can’t estimate how much time it will take when we can use bitcoin to buy all these things? We know it isn’t easy.

Technically anything can be treated as money if the sender is ready to receive and the buyer is ready to sell their produce in exchange for that thing. Like this, our barter system has been working for decades. Until people realised that everything is not equally valuable, due to this paper currencies were invested, which brought stability in the market. At that time, people were also concerned about fiat currency centralisation, which provided strength to the government and banks. They also thought paper currency also lose its value over time.

After the financial crisis of 2008, the cryptocurrency came out in the form of a decentralised currency. At that time, the public believed that as more people started purchasing it, its value would automatically increase, and it may also be considered as paper currency in future. But things do not happen like that. The reality is, the possibility can’t always be ruled out. Even fiat currency has developed and changed its appearances over the years. However, there are various factors that stop Bitcoin and other cryptocurrencies from becoming valuable as fiat currency.

Advantages of Bitcoin over fiat currencies

As per the bitcoin supporters, virtual Bitcoin consists of two major advantages against fiat currency. The first one is that its supply is limited, which makes it impossible for a government to deliver it in an amount that would devalue it. This refers to its less vulnerability to unrestricted crises like Zimbabwe, Germany, Venezuela. But it can also be treated as a weakness because it makes it impracticable for managing deflation. The continuity of that can also drag us toward severe economic consequences.

The second advantage of virtual Bitcoin is that all transactions are immutable and permanent. When money is present in a bank account, the bank can take away the money from its user and claim that it is never present. But with bitcoin, these types of things will not take place ever because the database of transactions can not be edited by any authority. All transactions are visible to everyone. This is because bitcoin is defined as “trustless”.

All these advantages are not technical. Hyperinflation is not a prime problem in modern economies, and when financial institutions are popular for engaging in fraudulent practices, they are generally finer than simply to seize their clients’ money and deny their money existence. The truth is that the significant benefit of bitcoin is its decentralisation that allows it to be used to break the law with fewer risks of prosecution.

Some top risk-free crypto brokers are PrimeFin and 101investing. An example of significant crypto fraud was the theft of $460 million worth of bitcoin that took place in the Mt. Gox Bitcoin exchange in 2013.

The utilisation of Bitcoin as a store of value is restricted via its volatility. On December 9, 2020, Bitcoin value in US dollar and However the number of goods that should be bought with Bitcoin get charged nearly 2.22% per day. The cost of bitcoin is increasing over time, and there is always a debate between advocates that the cryptocurrency is excellent storage of value due to its price increases as per timings.

We all know that future price prediction is a difficult task. But if optimization is proper, its costs will increase; this is the only point that shows virtual bitcoin is a good speculative investment. It does not mean that it is a valuable form of currency. Nations generally target to hold a stable currency compared to keeping high volatile currency.

What are central bank digital currencies?

A central bank digital currency (CBDC) is a kind of electronic money launched by the central bank. Existing national currencies should be traded electronically. So why do we need CBCD, and what are the advantages of it? This totally depends upon the proposal. It might permit the people to hold central bank lending or to allow a shift to easier payments systems. The more chances of that are that CBDC should allow a central government to keep a record of all transactions held on a blockchain because of the law enforcement.

Till now, only a few CBDC strategies have been applied. For instance, Finland’s “Avant” digital currency is no longer used because it was never launched with improvement for the debit card system in the early 2000s. There are so many other examples that are also present in the market.

Store of value and not currency

Central governments of different countries banned and restricted the limit to trade cryptocurrencies. The governments of different nations should not allow the exchange of crypto as a payment method. The Economy of the country is developed as per the government control over the currency. Which allows the government to determine how much currency will be created against internal and external pressure. If cryptocurrency takes the place of the dollar, that strength is removed. For instance, virtual bitcoin consists of a cap of 21 million, which means only 21 million bitcoins will exist in the world; no other bitcoin should be created, even when we require it.

There are various other concerns too. The whole idea was to develop a decentralised financial translation that works against cryptocurrency and Bitcoin. These transactions provide illegal jobs such as money laundering, tax evasion, and dealings in illegal activities.

It is not an easy task for virtual bitcoin to replace dollars or any other fiat currency. The existence of fiat currency is highly practical, and this is because regulation plays an important role. In the current situation, cryptocurrencies are only an attraction point for traders, stockholders, and investors. A regulatory framework offers it protection from all of that.

On the other hand, some investors and traders also do not take crypto seriously as a payment mode. They only use it to make investments and earn money fast compared to the mutual funds and stock market. This is the main reason why a lot of cryptocurrencies still have not changed their IP addresses in the last few years. That means people are storing them. Still, countries like the US do not accept virtual bitcoin as a payment method.

We can’t say if digital currency will be the future or not. But we can estimate this with the rapid increase of the cryptocurrency market. Yes, digital currencies are the future. In upcoming years you will be able to use digital money through your smartphones. Various countries are working on developing their own currencies, including China.

Virtual Bitcoin is a digital currency that works on the peer-to-peer principle. It is a series of blockchains that are created by blocks. The question that has become a hot topic these days is Whether bitcoin can replace fiat currency or not. Check Virtual bitcoins as a money substitute with pitfalls or not from the above article. Through this article, you are able to determine whether a cryptocurrency will become as powerful as fiat currencies. Here you also get answers to some repeatedly asked questions. Read the whole article carefully for cryptocurrency progress in upcoming years. Some top brokers who offer cryptocurrency trading are 101invesing and ROinvesting.

Is crypto more secure than fiat?

Cryptocurrencies take security measures to protect their integrity and offer protection to their users. Unlike fiat currencies, cryptocurrency should not be corrupted due to its decentralisation and security of the crypto coins.

Cryptocurrency will replace fiat currencies approximately in the upcoming 5 years, as per the financial expert Deloitte. But possibilities never run out of the truth. Still, people do not accept cryptocurrency in exchange for their products. Even Tesla stopped selling its cars in exchange for virtual bitcoin.

No, Bitcoin is not worthless because demands determine its value. Therefore, it doesn’t actually exist. Generally, it can be traded for services and goods similarly to traditional currencies. But currently, it is used as a trading source for generating high returns.

Can Bitcoin be trusted?

As per regular wallet, which requires attention, Bitcoin makes it easy to make transactions in an easy way and provides you with control of your money. All great features lead to security concerns. Bitcoin should provide a high level of security if you use it properly and give attention to the bitcoin wallet.