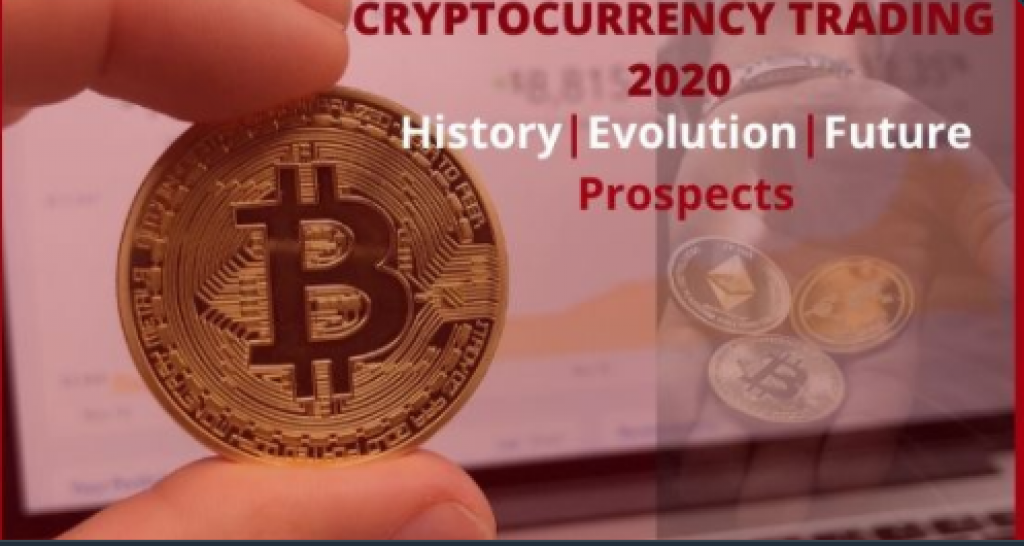 Cryptocurrency Trading 2022 – History, Evolution, Future Prospects: Everyone in your peer group is talking about Bitcoins and altcoin, but you don’t know anything about it. Some say their future is bright, while some criticize their volatile nature. But, you, on the other hand, just do not know anything. How this Bitcoin came, and what is block-chain? How did it start? Should you invest in it or not?

Nothing! But, don’t worry!

Here in this article, we would be resolving all your doubts and queries. We would first start with the foundation, i.e. how this all crypto trading started. Then, we would briefly describe the current market scenario of cryptocurrencies and Bitcoin, the largest crypto. After that, there would be some cool predictions about this emerging market, followed by a conclusion post.

The idea of digital money first came into the mind of a cryptographer, David Chaum. He invented an unprecedented algorithm which was able to exchange information and data between two parties, which placed the foundation of electronic cash transfer. He called it “blinded money” developed with a “blinding algorithm.” The transferred data couldn’t alter and was secure, but unlike crypto trading, it centralized.

Then, later on, David, with his team, founded Digicash, which generated currency from the same concept. But soon after that, Netherland’s central bank intervened, and Digicash had to discontinue.

After David developed the concept of web-based encryption data transfer, a software developer named Wei Dai, introduced the notion of digital currency, called “B-money”, on a white paper. The idea was to transfer money among the digitally created pseudonym groups. It was very much similar to today’s cryptocurrency trading concept.

One attempt also made by David Chaum’s friend and blockchain expert Nick Szabo. He created a cryptocurrency called Bitgold, using the same blockchain and cryptographic technology, which is used today.

But Bitgold was unable to fetch people’s attention and soon closed its operations.

After so many failures in the crypto trading industry, in October 2018, a paper named Bitcoin – A Peer to Peer Electronic Cash System was posted on a cryptography discussion group, which explained the working of Bitcoin blockchain network. It was published by someone called Satoshi Nakamoto. His identity is still a mystery, and many believe that he holds around 700,000 – 1,000,000 Bitcoins (BTC).

During the time this technical paper was published, someone also bought the domain name Bitcoin.org, and Satoshi launched the software for BTC mining.

January 2009, first BTC transaction occurred, when Satoshi transferred 10 bitcoins to one of his friends, Hal Finney. From then, Bitcoin mining was made open for the public, and it established the founding stone of a revolution.

Since then, Bitcoin mining started occurring, but it didn’t have any monetary value yet. Then, on 2nd May, the first BTC transaction happened. A person bought two pizzas in exchange for some Bitcoins. How many..?

Pretty unfair deal it was!

After 2009, Bitcoin gradually started gaining popularity. There were several infamous reasons behind it. First, it kept aside all the banks and financial institutions away. Second, it was utterly decentralized and web-encrypted, which did not reveal the true identity of both the parties.

But the concept was new, and there were several developments still required. But, till this time, it got into the eyes of hackers, and in August 2010, a strange 184,000,000,000 Bitcoin transaction happened. The mystery about these BTCs is unsolved till date.

Till this time, Bitcoin gained significant popularity, and this led to the emergence of other counterparts in the crypto trading industry. Several rival digital currencies entered the market this year. Litecoin, Swiftcoin, and Namecoin were some of them.

Today, ethereum, Ripple, Tero, Monero, and Dash are some of the best cryptos. These alternative cryptos are called altcoins, and there are around 1500 altcoins currently.

These altcoins came as a response to the limitations of Bitcoin. Speed, cost, privacy, and scalability were some of them.

Around this time, Mt. Gox, a cryptocurrency trading platform, was also launched. In June 2011, Mt. Gox got hacked for the first time, costing 2000 BTCs.

The hackers attracted by its pseudo identity feature, which made it easier for them to hack the systems.

However, this doesn’t halt Bitcoins and other cryptos. The prices were gradually increasing day-by-day.

Another major event occurred when Mt. Gox got hacked again. But, this time the system automatically went offline, and within minutes some 850,000 Bitcoins were cleared.

The value of these BTC that time was a whopping $450 million. Now, calculate it’s worth currently. It would be in billions.

This year marked the launch of second-biggest cryptocurrency- Ethereum. It was launched through an ICO* (Initial Coin Offering), which is the same as an IPO. The only difference is while IPOs are for shares, ICO is for cryptos. Ether raised $75 million funds, which is record highest for any crypto trading platform.

*ICO: It is a fundraising platform, where investors can buy cryptocurrencies at a predetermined price. Mastercoin launched the first ICO in 2013.

After that Bitcoin gradually became stronger day-by-day. It was evident that more people were investing in it. The crypto ATMs also came into existence and increased in number drastically till 2018. Many companies, like uber, started accepting crypto payments.

During this time, the cryptocurrency trading became a vast $300 Billion market.

But, since then, the crypto market has also become one of the most volatile and unpredictable markets in the world.

So, this was the history and evolution of cryptocurrency and the market. We have tried to cover every significant event and occurring from the inception. But, one should also be aware of the current scenario.

Presently, different nations are dealing variedly with cryptocurrencies and their usage. While many advocate it as an alternative form of money, many have taken a wary and banned it.

For instance, countries like China & Ukraine have banned the use of cryptos in their countries. However, countries like Japan & Australia see good potential in it and are recognizing them as legit. India, the largest Bitcoin trading nation, banned crypto trading back in 2017 but, just recently in march 2020, it lifted that ban too.

So, this was the scenario of some nations. The current condition of crypto, in any country, would be one of the three situations mentioned above.

But, what matters above all is what could be the future of crypto in the world? What do experts say? What are the predictions? We would try to answer all these questions.

Future of Cryptocurrency: All Prospects

We all know the future can’t predict. It becomes more difficult to say something about cryptocurrency, which is already too volatile. But still, people having expertise in a similar field can tell us some things more accurately than us. According to them, cryptocurrencies mean to grow, and no one can stop it.

As you must have seen, Bitcoin has covered a long journey. From being exchanged for two pizzas to taking over the world in 2017. It has come a long way. Similarly, Analysts predict some significant changes for the cryptocurrency trading market and altcoins too. Below is the list of top of them.

One of the famous predictions we have today about is people would start using crypto as an alternative form of currency soon. We already can see how people are shifting towards digital transactions. And sooner or later, people would move to non-cash non-fiat currency transactions too. The reasons for the shift could be safety, security, less cost, flexibility, etc.

This might not be the case today, but the time the world would be hit by any financial crisis, the tables might turn. People’s trust in fiat currencies would decrease, and they would look for alternatives. Thus, to manage the cash flow in their nations, institutions would have to accept cryptos as a legit payment. Many governments, like Estonia, is already following it

A Makeover of the Banking Sector

When the whole world, including the government, would accept cryptos, the banks would have no option but to undergo a change. The benefit is also for the banking sector as it would reduce their working complexities too. Thus, it could also happen that banks start the crypto trading revolution first. These are some changes you might encounter.

There are still many drawbacks in currently operating cryptos. The scope for innovation and development would lead to the emergence of better alternative cryptos.

The basic volatile nature of cryptocurrencies would continue. An asset having low volatility has some regulatory body above them, but this is not the case with crypto trading. The crypto does not control by any single entity and decentralize.

Despite so much criticism, Bitcoin’s charm is no less yet. And, the experts from different fields predict that Bitcoin is the future money. In fact, Snapchat’s founder, Jeremy Liew, has predicted that Bitcoin would hit the $500K mark before 2030.

So, these were some prospects about the future of cryptocurrency. Remember, these are just predictions and does not bound to be true. However, these are not our but expert’s predictions. Now, only time would tell how many of them come true?

From just a seed in 1980 to a giant in 2020, this crypto trading market is showing no signs of stopping. The story of Bitcoin is no less than a film. How this failure, in 1998, turned into a $250 Billion market is worth noting! And, no matter what the current scenario is, crypto would significantly affect the financial ecosystem of the world. Some predictions might come true soon, while some might take some more time.

Remember, this is only the beginning and change is the only constant we have. Thus, don’t be surprised if you see turning crypto into operating currencies.

In other words, don’t ask what is crypto’s future, because crypto is the future!!!